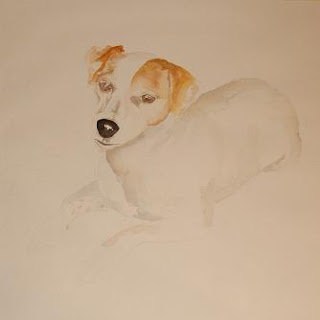 This is a commissioned painting that will ultimately be a Christmas gift to the owner of Maddey, the Jack Russell Terrier/Chihuahua mix.  I received several reference photos from my client (and good family friend).  All of the photos show a very sweet-faced dog who was obviously very well loved.

However, Maddey's story is a sad one.  While her owner was burning brush on their farm, Maddey got excited chasing after a rabbit and followed it right into the burning brush pile.  She did not survive.

Since I received such nice reference photos, I may try a different pose for Maddey's portrait.  She had some really great expressions and I want to be sure to capture just the right one.

Considering she is mostly white on her body, I plan to build up the background around her in order to make the painting "pop".  I'll also go in and detail her eyes more in addition to her little paws.  There is still plenty of work to be done, but I hope to have more to show by tomorrow.
Posted by Gretchen Bjornson ART at 8:59 AM

Promote Your Page Too

Pin away, but please give credit where credit is due. All images are property of Gretchen Bjornson.