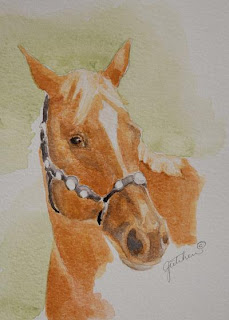 The first horse that I could claim as “my own” was a sorrel quarter horse named Geishia. A flashy horse, by my standards, she had a flaxen mane and tail as well as a star, strip, and snip on her face, and a couple of white stockings. My parents purchased her to be my 4-H project. The biggest selling point for me was her slow, rhythmic jog and her beauty, of course. Although beautiful, she had the fiery disposition of a true mare. Leisurely 4-H trail rides were nothing of the sort with Geishia. While the other 4-Her’s horses plodded along quietly down the trail, Geishia would work herself into a sweaty lather as she pranced and danced her way through the woods…..leaving me in tears of frustration.

Her attitude did not deter me from the show ring. But once again, as the other pleasure horses loped and jogged quietly around the arena, Geishia would defiantly throw her head and nervously prance and gallop. Don’t get me wrong, I always maintained control of my steed, I was just always in fast-forward with her.

We did have a few successes, one being the showmanship class, where the rider presents their horse from the ground. We were able to secure a spot at the Ohio State Fair and ended up placing in our class. It was a defining moment for both of us.

Geishia was “my horse” for several years before the time came to sell her. I visited her once after she went to her new owner. She didn’t appear as big as I had remembered her. However, it had been awhile since I last saw her and I had grown taller so I was no longer looking up at her. I was now eye to eye with her. Age had definitely mellowed Geishia…no longer the fiery mare she use to be. But she will always be lovingly remembered as “My Horse”.
Posted by Gretchen Bjornson ART at 7:32 PM

Promote Your Page Too

Pin away, but please give credit where credit is due. All images are property of Gretchen Bjornson.